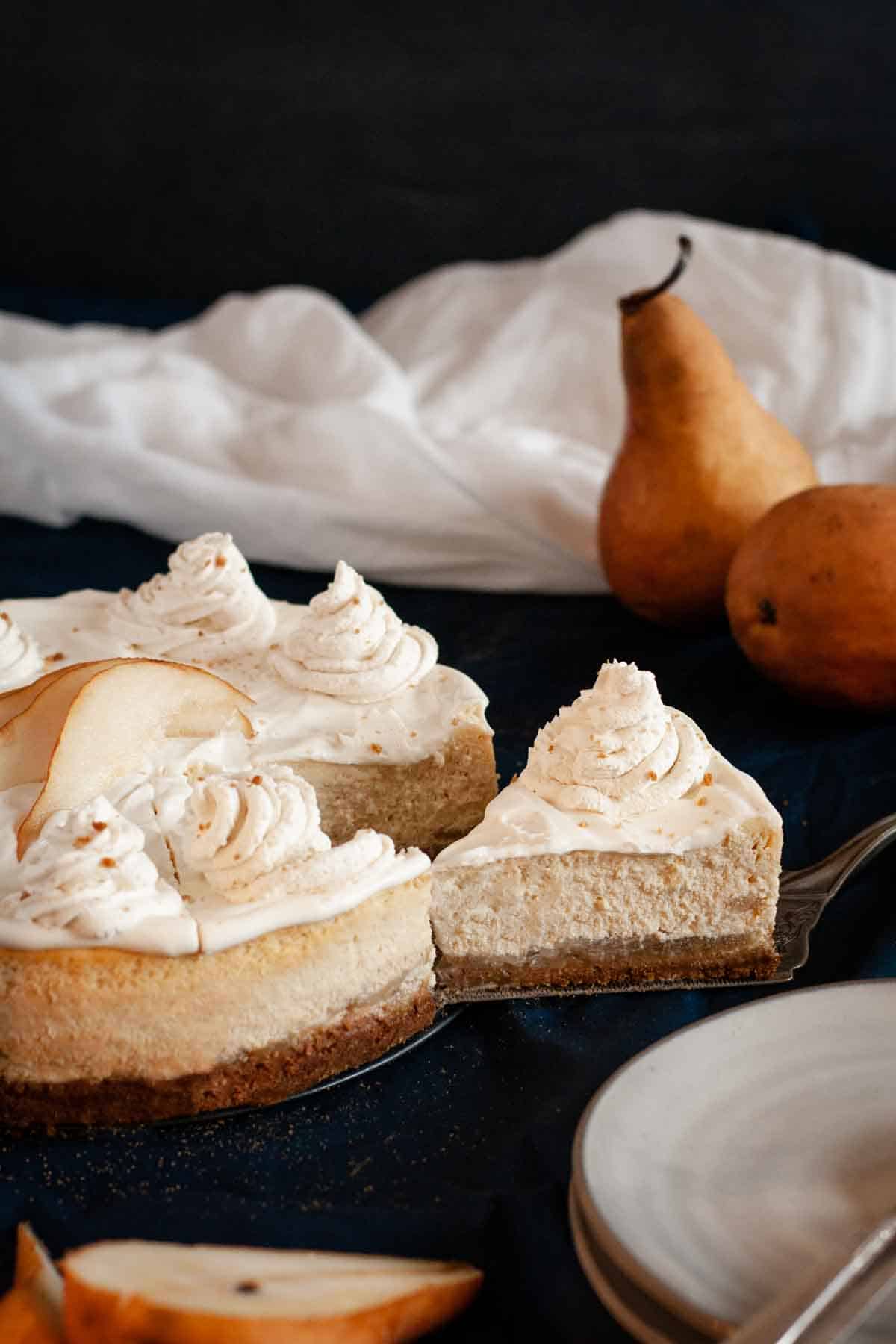 Pear cheesecake with ginger spice is a holiday favorite in our home, whether it be a contribution to Thanksgiving, Christmas or New Years!

I have many variations of baked cheesecake recipes that I love to make, but this time of year the winner is always my spiced pear cheesecake with ginger. Pears are bountiful this time of year and I love to take advantage of seasonal produce whenever I can. The layer of poached pear adds a nice contrast in texture to the creamy smooth cheesecake, and the ginger spice helps meld the flavors into a uniform dish.

Creamy and smooth, I’ve always been a sucker for a good cheesecake. As a kid, on the rare occasion that we were allowed to order dessert, cheesecake was always my favorite. Once I got into high-school I discovered there was a decent market for baked cheesecakes in my hometown, and it was a fun way to fuel my love of baking and earn some extra cash as well!

How to Make Baked Cheesecake:

Contrary to what many people believe, cheesecake is surprisingly simple to make.

The key to baked cheesecake is low oven temperature (300°F) and allowing the cake to slowly cool without jiggling it.

The crust for this recipe is as simple as just making a basic graham cracker crust using crushed crackers & melted butter. I use my blender to crush the crackers, but if you don’t have a blender you can pound the crackers with a rolling pin, in a sealed Ziploc bag, until finely crushed. For this recipe I add ginger spice right into the crust for an additional burst of flavor. Another option, is to make this a pear cheesecake with gingersnap crust by crushing gingersnaps instead of graham crackers. If you do this, then omit the extra ginger in the crust.

For cheesecake there is no need to grease your springform pan as you would for traditional cake. Once the cake has cooled, unlatching the pan will allow it to slide off nicely from the cheesecake. If you notice any resistance, then just re-latch the pan before proceeding and run a smooth knife along the edges before unlatching. That’s it!

If your cheesecake cracks, then know that it does not affect the overall flavor and texture unless you severely overbaked it. When I have this problem (typically kids running around causing it to jiggle too much as it cools), then the great thing about the sour cream topping is it also fills in any cracks, and gives the appearance of a perfect cheesecake anyways!

The filling for homemade cheesecake is naturally gluten free, making it super easy to just convert the crust to gluten free and make this a favorite for everyone! If you want to make this recipe gluten free like I do, then just use gluten free graham crackers in place of regular ones. An 8oz box works perfectly. The brand typically carried in my grocery store is Kinnikinnick which I love, otherwise I order some Pamela’s brand ones with my monthly Thrive order.

Making Cheesecake Ahead and Freezing:

Any cheesecake is best after it has sat for a day or two, so this is the perfect make ahead dessert! If you want to make cheesecake more than a few days in advance, then cheesecake lends itself very well to freezing! To freeze a cheesecake just place the finished cheesecake on a cardboard circle and freeze 24hrs until firm. Once the cheesecake is frozen, then wrap it tightly, all around with 2 layers of plastic, and then a layer of foil to keep out any freezer burn. Freeze for up to one month. Thaw in the refrigerator for 24 hours when ready to use.

Need More Dessert Inspiration? Here are Some Reader Favorites You Might Enjoy!

For the Poached Pear Layer:

For the Cheesecake Filling:

To poach the pears:

Cheesecake is best served a day or two after making it, and will keep in the fridge, covered, for up to 5 days. For longer term storage see blog post for notes on freezing cheesecake.

*Nutrition information is automatically calculated and may not always be accurate.

Did you make this recipe?

Leave me a comment below, or tag me on Instagram @mountainberry_eats to show me what’s cooking in your kitchen!

Spread the goodness and share this recipe with others!

One thought on “Pear Cheesecake with Ginger Spice”