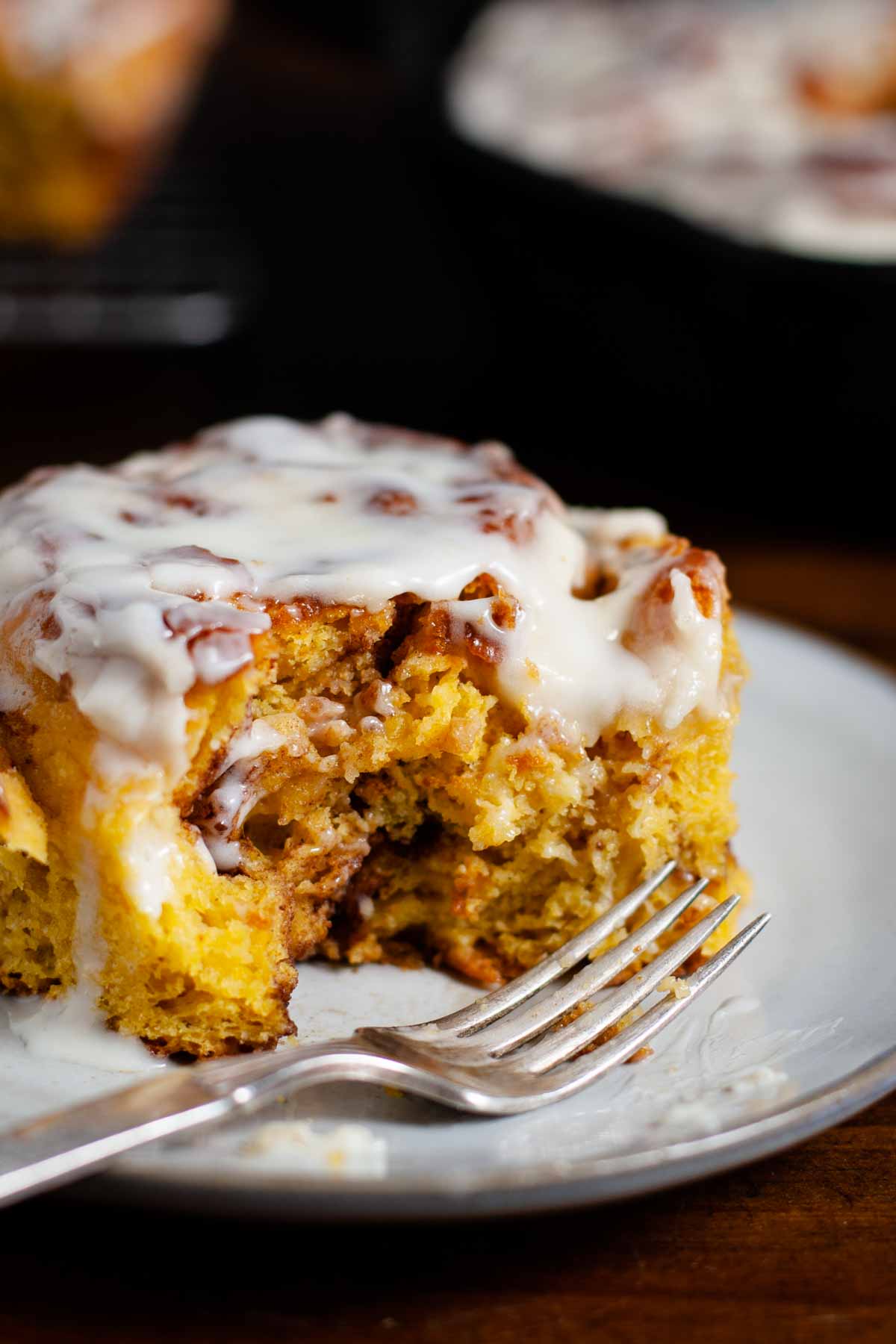 This gluten free pumpkin cinnamon roll recipe will bring back hope to your cinnamon roll despair! Soft and fluffy is not often a word describing gluten free baked goods, and this recipe took many batches of trial and error before finally getting it perfect. Bursting with hints of pumpkin spice, and cinnamon goodness, these cinnamon rolls are topped with a heavenly cream cheese frosting to finish them off.

The key to these gluten free pumpkin cinnamon rolls is to allow plenty of time for rising. The dough itself comes together rather quickly but it is ideal to mix up the dough the afternoon or evening before. So, can you let cinnamon roll dough sit overnight? Most definitely, and for this recipe it is ideal! After the first initial rise, just throw the dough in the fridge overnight to firm up and absorb the starches from the flour.

This is one of the most challenging and frequently asked questions in all of gluten free baked goods. When the gluten is omitted from baked goods, many other factors come into play. Some recipes just swap the flour and it’s no big deal. If you do this with gluten free cinnamon rolls, you will end up with a tough dense product. This is why you need to adjust other aspects as well.

I have tried many different recipes for gluten free pumpkin cinnamon rolls, and though many of them had great flavor, the texture never compared to the fluffy cinnamon rolls I once knew! 😭

One of the biggest mistakes I have discovered people make in gluten free baking, is that they try to match dough consistency to what they have experienced in baked goods that contain gluten. I made the same mistake with the first trial batches of these gluten free pumpkin cinnamon rolls. Do not expect the dough consistency to be the same as traditional cinnamon roll dough! If you do, then your cinnamon rolls will end up being tough. This dough starts out quite thin and is more of a batter. The overnight chill time is key in allowing it to firm up without making it dense.

In addition to a thinner dough to start out, if you want your cinnamon rolls to be fluffy you will need to increase the leavening. For gluten free baking, it is typically better to use quick-rise yeast instead of traditional yeast. As well as yeast, this gluten free pumpkin cinnamon roll recipe uses baking powder to help give it a jumpstart on the rise when being baked.

Though these cinnamon rolls have a thin dough, you want to keep all that flavor and complexity that traditional thick dough has. Since adding the normal amount of milk makes our batter too thin, adding whey-isolate helps the cinnamon rolls texture. It also replaces the protein and provides some of the structure that the gluten in traditional flour provides.

In case you are worried about having a container of whey isolate that you will never use again, you can be re-assured that it comes in very handy for more than just cinnamon rolls! This brand that I use is unflavored so I love to put in my everyday smoothies. I also use it in our week-day blender pancakes to add additional protein for our busy days.

How do you make cinnamon roll glaze from scratch?

These gluten free pumpkin cinnamon rolls are topped with a delightful cream cheese frosting that comes together in just minutes. This cinnamon roll frosting recipe is great on any type of cinnamon roll! You can adjust the thickness to your liking by just adding milk until it reaches the desired consistency.

How to store and reheat extra cinnamon rolls:

This recipe makes 12 cinnamon rolls, but you can easily cut the recipe in half to make just 6.

To Assemble and Bake the Cinnamon Rolls:

To make the Frosting:

* The quantity of these items can vary greatly if they are not measured carefully. If you do not have a kitchen scale then fluff these ingredients well with a fork and gently spoon into a measuring cup. Lastly, use the flat edge of a knife to scrape off excess and level the amount in the measuring cup.

• Potato Starch can be substituted for tapioca flour in this recipe just fine if needed.

• Whey Isolate is very helpful in GF baking though in a pinch you could sub powder milk if needed.

*Nutrition information is automatically calculated and may not always be accurate.

Did you make this recipe?

Leave me a comment below, or tag me on Instagram @mountainberry_eats to show me what’s cooking in your kitchen!

Spread the goodness and share this recipe with others!